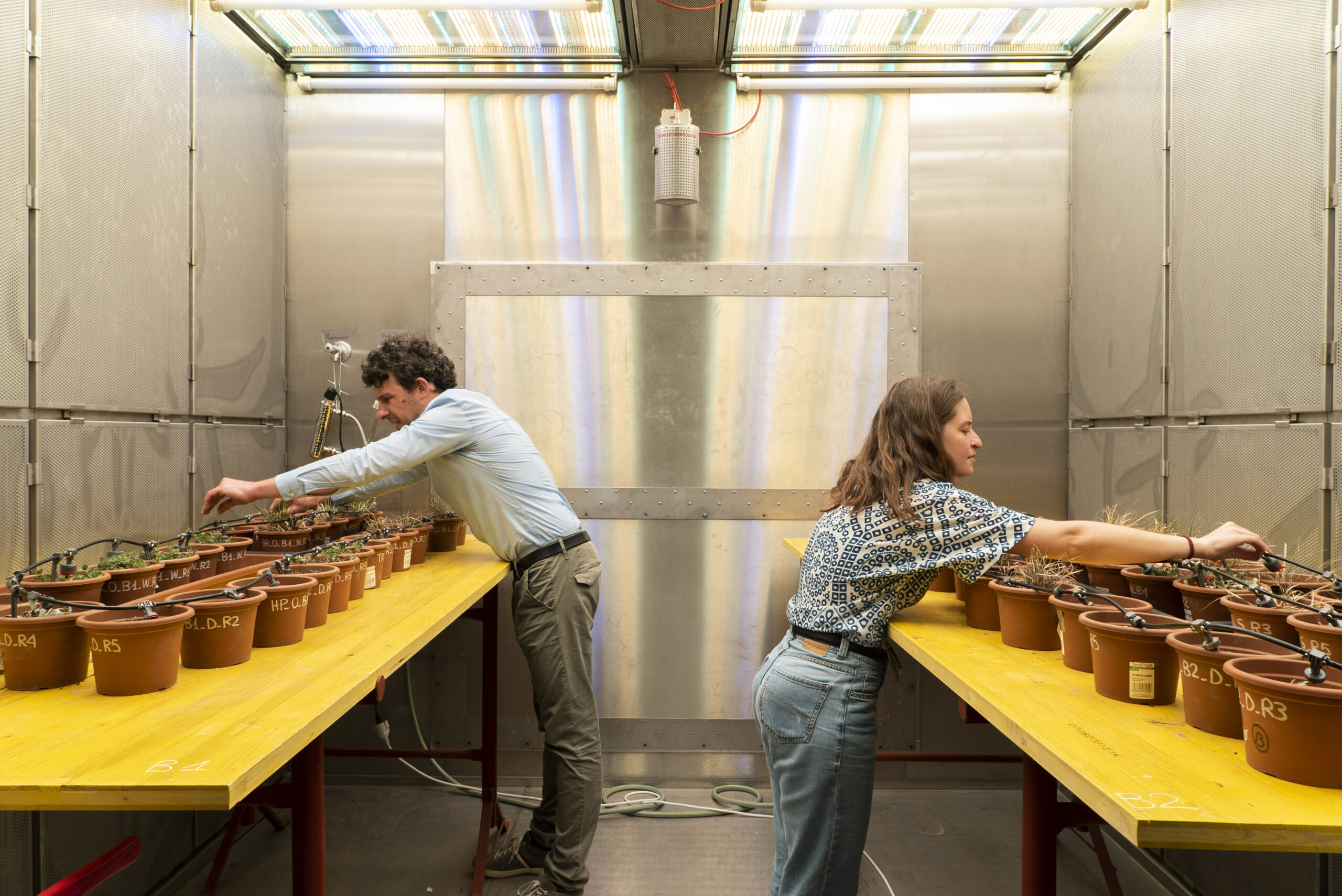 Climate change and rising temperatures are increasingly pushing animals, plants, and microorganisms to higher altitudes. But how do living beings adapt to new conditions? A study taking place in the terraXcube observes how reduced atmospheric pressure affects photosynthesis and transpiration in plants. And whether soil microorganisms can support this adaptation.

In the mountains, a number of plant species are adapting to life at higher altitudes, a fact described by numerous scientific studies.

While various research studies have confirmed the shift of some plant species to higher altitudes, their physiological response has rarely been observed and the relationship between low atmospheric pressure and the adaptation mechanisms of plants has never been studied in depth until now.

‘When we study organisms in their habitat, all the environmental conditions are closely correlated. Distinguishing them is almost impossible” says Matteo Dainese, ecologist at Eurac Research’s Institute for the Alpine Environment.

“Studying the influence of a single environmental factor – such as atmospheric pressure – through observations in the real environment is extremely complex,” explains Dainese. “When we study organisms in their habitat in the mountains, certain environmental conditions, such as pressure and temperature, are closely correlated. Distinguishing them is almost impossible”. This is why researchers from Eurac Research and the University of Innsbruck have devised the special experiment currently taking place in our climatic chambers. In our new-generation infrastructure, the change in altitude is being artificially simulated for certain plant species normally found in South Tyrol, with a research team on standby to observe their reactions.

Inside terraXcube, a number of species that can be found in the Val di Mazia (1500 m.a.s.l) are being artificially brought to higher altitudes with other factors such as temperature, humidity and the amount of light being kept constant. “In this way we are able to observe, over the course of a few weeks, how the lower atmospheric pressure present at high altitudes will affect how plants function,” explains Matteo Dainese. In particular, changes in the mechanisms regulating photosynthetic activity and transpiration will be observed. These studies will reveal which plants are adaptable and which are likely to go into stress at high altitudes.

The groundbreaking experiment took place in our Small Cubes, four chambers each capable of independently replicating different environmental conditions typical of the Alps. In one chamber, atmospheric pressure typical of the Val di Mazia – 1,500 m.a.s.l, where the plants were collected, was recreated. In a second chamber, the lowest altitude found in South Tyrol – that of Bolzano at 200 m.a.s.l, was kept constant. In a third, the plants were taken to an altitude of 2,500 m.a.s.l. “According to various climate models, this is one of the most radical – but still plausible – scenarios we could have around the year 2100. The RCP8.5 scenario, inevitable if there is no mitigation of global emissions, predicts a temperature increase of between 4 °C and 7 °C by the end of the century. This means that plant species could move 600-1000 meters higher,’ says Matteo Dainese.

In a third chamber, plants are taken to an altitude of 2,500 m.a.s.l, a radical climate scenario, but still likely to happen if there is no mitigation in global emissions.

Finally, the last chamber will be dedicated to an extreme scenario: 4000 m.a.s.l. “This is not a realistic scenario. However, this would allow us to observe more clearly how the plant works at such low atmospheric pressures. This altitude is the upper limit at which vascular plants can be found in mountains of the temperate region’. The experiment does not end there, however. Special attention is paid not only to plants, but also to an additional element that is suspected to help the adaptation in new habitats: tiny soil microorganisms.

Some research suggests that soil microorganisms may have a mediating function in the adaptation mechanisms of plants in new habitats. Microbiologists from the University of Innsbruck have joined the study to evaluate just this, how altitude affects soil microbes, both alone and in their interaction with plants. “The hypothesis is that certain microorganisms are more adaptable to life at high altitude than others. And, that these microorganisms can help plants cope with new environmental conditions,’ explains Paul Illmer, head of the soil microbiology and climate change research group at the University of Innsbruck. In the different simulated altitude scenarios, some plants will be grown in sterilized soil – without a microbial component whilst others will be grown on soil from the Mazia Valley, containing the microorganisms typical of their natural habitat. In addition, different microbial cultures containing both fungi and bacteria will also be tested. “The aim is to understand which micro-organisms are most adaptable to altitude and which are most effective in mitigating the effects of altitude in plants”.

“Initially, we want to observe the plant’s immediate response to changes in atmospheric pressure – the most difficult element to analyze with studies under real conditions”. But the UPSHIFT project as a whole will only conclude at the end in 2024. “In the next experiments we are going to shake things up by observing the behaviour of microorganisms and plants from different habitats and altitudes and making them interact in new ecological communities.”

In the terraXcube we can observe what might happen to ecological communities, a few decades in advance.

Due to climate change, these scenarios are plausible. Not all organisms will displace or adapt in the same way. Yet, a recombination of natural communities and their structures will certainly occur – plants, insects and microorganisms from lower altitudes will coexist with established species. This means that the ecological communities of the future will consist of new species and new combinations of plant, insect and soil organisms. In our simulation chambers, we can observe what might happen – a few decades in advance.

The UPSHIFT project is funded by the Autonomous Province of Bolzano and by the FWF (Austrian Science Fund).

back to all news
Menu